Well last night was interesting. The fog was descending in Magor, but I headed up to the high point at around 7:35pm on the top of Ridgeway, Newport. Dale (MW6FNV) was due to join me a bit later on. It was very foggy up there when I arrived, and turned the radio on and dialled into 145.375 on one VFO and GB3RT (433.000 listen) on the other vfo. The Kenwood TM-D710GE in the truck, with the Diamond NR-7900 mobile antenna, 10 watts.

A call was put out on 2m 375 but nothing heard, I glanced at the other vfo and noticed an S3/4 signal, but the squelch was not opening as it was looking for 94.8. So I had a listen by turning the tone squelch off my end and to my astonishment I could hear GB3CK, on the same frequencies as GB3RT, but a different access tone !  This repeater some 165 miles away, belonging to the Kent Repeater Group. It is located on the hills above Charing in Kent, just this side of Canterbury. 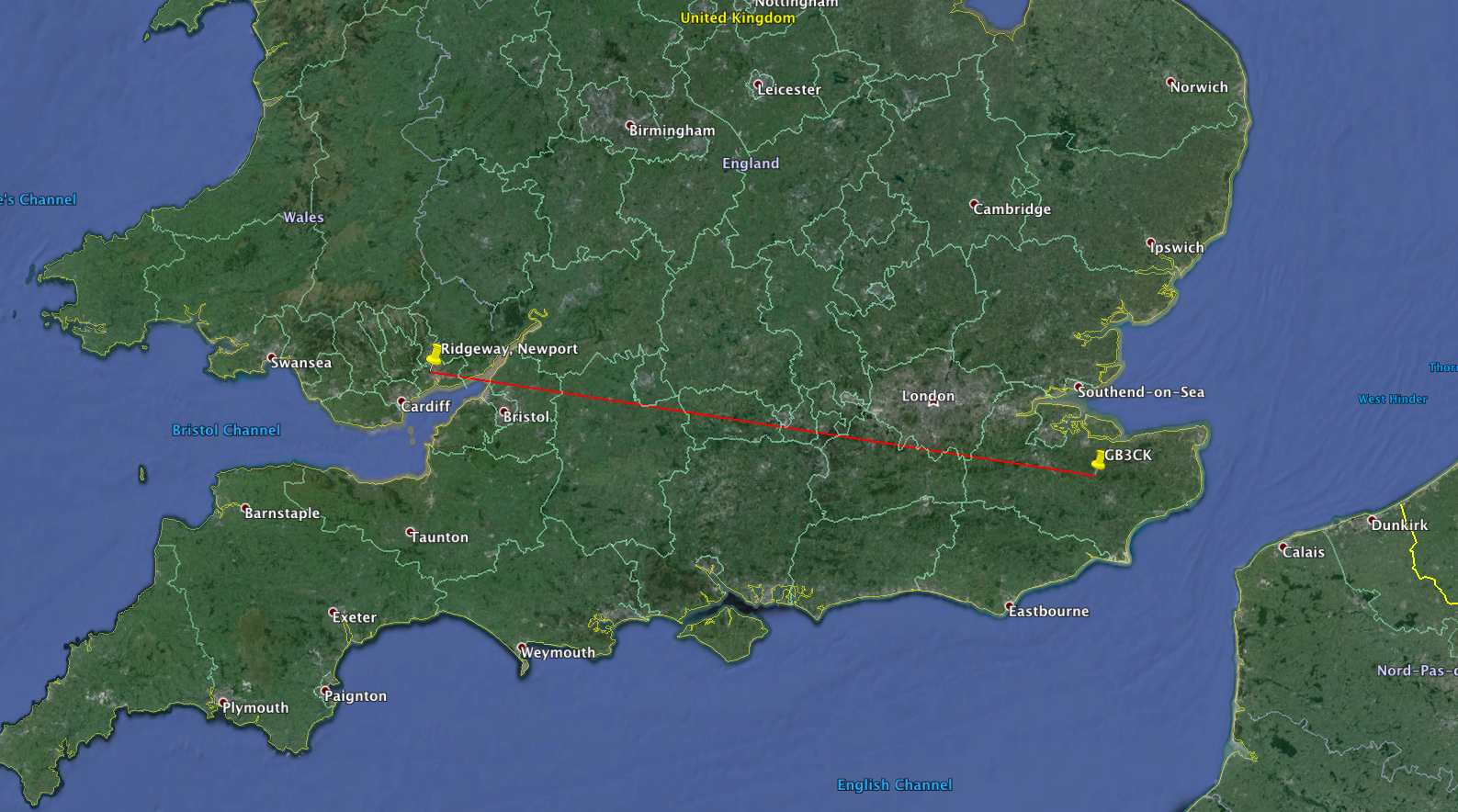 I listened for a while, and the signal was hovering around an S3-S5 so some QSB on the frequency. I decided to put a call in after scanning for the tone (103.5) and I got through. I had a chat with two stations, mother and son. MW6GVZ, Jill, based in Sevenoaks (or is it one oak these days?), and 2E0KJJ, her son Jeremy, based in Canterbury. It transpired that Jeremy was attending the University of Kent at Canterbury, the same uni I went to, some 20 years ago, a small world indeed. We had a quick qso, but fearful of conditions dropping out I said my 73 and listened in for another 5-10 mins, at which point they started dropping down to S1. I was using legal limit power output of 10w from the Kenwood TM-D710GE radio into the Diamond NR-7900 mobile antenna. Fantastic conditions indeed. Their signals were both quality 5, and the repeater giving me S4/S5.

Listening around other repeaters all sorts of stations and signals were being heard, so there did seem to be interesting conditions.

I put another call in on 375 after the excitement of the distant repeater QSO, with power now set to 5w, worried that my signal would be interfering with all sorts. Jim came up (MW6MUN) and Ian (GW8CRH), both 5/9 on the input. Chris (MW6LUK) showed up for a brief 10 seconds, but I gather from a background conversation he was called away, his signal 5/8 on the input (yes I did check even with the short transmission). Nigel (GW7SSN) also popped in to say hi and let us know what he was doing better. Get well soon Nigel !!! His signal another 5/9 on the input.

Sometime later, around 8:40pm Pete (MW0RPB/A), Chris (2W0OGY/M) and Ken (MW0YAC/A) came on briefly to say hi, all great signals, all 5/9 on the input. Pete and Ken enjoying a brew at the Dorallt and Chris on his way home in the car.

I stayed up there for an hour or so after, but wasn’t really in the mood for playing radio as I was rather tired and headed home around 10:20pm ish.