Peter (MW0RPB) closed down the MB7TR 2m repeater in Cwmbran a year or so ago. I decided to start my own here in Magor. This time however, it would be on 70cm, using the same callsign.

MB7TR is now a 70cm, FM, regenerative sstv repeater based in Magor, S.Wales. It shares the Diamond X300n antenna with APRS station MB7UNE.

All details can be found HERE.

A friend and fellow amateur radio enthusiast, Ross GW3NWS, let me borrow one of his TCO’s, a ToyoCom 5MHz unit.

As I wanted to obtain some higher accuracy to the results, I decided to use the 9th harmonic at 45MHz. The signal was observed on a SunSDR2 Pro, that had been provided with a GPSDO 10Mhz reference signal.

The TCO-613 was powered up from cold, the following was observed, again using WSJT-X in FreqCal mode. After 12 minutes the TCO settled to around 0.43Hz high at 45MHz, an average of the last 8 minutes of delta frequency. The test was concluded after 20 minutes. No adjustment had been made and was tested as provided by Ross.

Since I recently modified my IC-9700 with a Leo Bodenar master reference insertion board providing it with a GPSDO locked master frequency of 49.152MHz I have been looking at drift of a number of my radios. I decided to test the IC-705.

I set the IC-9700 to transmit a carrier on 439.999MHz into a dummy load @ 0% RF (perhaps 1-2W not tested). This transmission was performed for 2hrs and monitored on the IC-705. I dropped the RX gain on the IC-705 and offset the VFO -1.5kHz so that I could monitor it using WSJT-X in FreqCal mode. The audio was taken from the IC-705 and provided to WSJT-X. The carrier would now show at 1500Hz in the audio passband in WSJT-X. The FreqCal mode shows delta frequency from this 1500Hz middle point.

I do not have any temperature values, however the in built temperature display was observed at the start and end of the test. The orange bar shows the swing, from high (right side) to low (left side).

I decided to try to work out the peak deviations in FM when transmitting from an IC-9700 and an IC-705 into a dummy load. The receiving transceiver is a SunSDR2 Pro without antenna connected. I used a software sig gen to feed both Icom radios with an audio tone via their USB audio interface.

This tone is adjusted whilst observing the FM transmission on another SDR receiver, or listening to the fundamental frequency with narrow CW filter. The injected tone’s frequency is adjusted to bring the main carrier frequency to the zero point (null) in the bessel function, the carrier at the fundamental will drop to zero on the sdr, and it will go silent on the receiver that is listening in CW mode.

Concerned about the isolation between each socket when running 400w I ran some numbers :

When running JTDX (version rc155 with the ic-705 supported) and the Icom Remote Utility I kept getting annoying errors from HamLib which made it unusable.

It seems that if you turn OFF the CI-V Transceive option in the Connectors->CI-V menu this fixes the issue. All problems went away, however I did need to restart the Icom Remote Utility.

I assume Hamlib wasn’t handling the returned ci-v commands with the ci-v transceive setting enabled. This may be the case on all Icom radios, not sure, however it is a default setting on the ic-705.

I was fortunate enough to be able to operate GB19SG for the Cricket World Cup RSGB event, the call being managed by Rich GW4BVJ. As a member of the small team I operated many times from the home QTH, friends QTH on both SSB and FT8/4, and portable. It was very enjoyable indeed. Below are some pictures from the portable activities. 73 ! 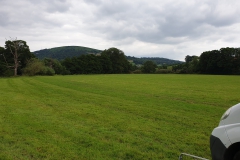 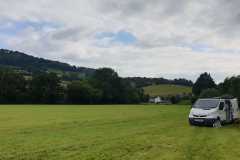 So, unless you have been living under a rock you will have heard of DX Commander. M0MCX, Callum, runs a micro antenna business producing mostly multiband vertical antennas. He also runs a very enjoyable YouTube channel.

Based on a ‘fan dipole’ idea, half of the the dipole is taken and turned on end, and driven elements for each band run up a vertical fibreglass flag pole. With a suitable ground system deployed a multiband HF vertical can be achieved very quickly. Research paper after research paper shows that diminishing returns are reached with roughly 4 times the amount of copper down as the wavelength of the lowest frequency band. So, if you want to reach those diminishing returns on 20m for example, you need something over 80m of ground radials, and don’t stress making them 1/4 wave or anything, just any old length, 20 to 30 radials of 4m each would be fantastic. Just chuck them down and get on the air !!!!

Anyway, with the ‘technomagic’ aside, I decided to built my own home brew version. I am using an aluminium plasterers hawk, upturned to act as the ground plate to attach all the radials to. Drilled and tapped, suitable bolts and an so239 attached, it is very easy to deploy. A couple of holes can be made to push tent pegs through.

I picked up a DX Commander 10m fibreglass pole. The end cap can be removed and it sits nicely over the handle from the plasterers hawk.

In Part 2 I will build the ‘spacer plates’ and get the elements cut for each band I want to operate on.

So, my friend had problems with his IC-7851 doing strange things. After hours of diagnostics the issue was found. The interlink cable between the STEP-iR control box and the CI-V port on the back of the radio seemed to be causing the USB disconnects and other gremlins. With the interconnect removed, all problems vanished.

We tried ferrite after ferrite on that cable to no avail. Either the early generation STEP-iR control box has insufficient RF attenuation, or there is some other issue, perhaps with the ic-7851 or the data/control cable from the tower to the STEP-iR control box. Either way, with the interconnect removed, and consequently no auto control of bands, then the problem goes ‘away’.

A friend has been having some issues with his new, rather gorgeous, ICOM flag ship radio, the IC-7851. CAT issues, com port issue, cw keying issues, STEPir tracking issues. This post is really to act as a record, and perhaps help anyone else with similar problems. All related to configuration, possible conflicts and other such annoying gremlins.

So, after removing the icom usb drivers, unplugging the usb cable, and reinstalling the drivers, then reconnecting the usb cable, the radio and computer seemed happy. COM7 and COM8 showed up in device manager. However, there does seem to be an issue where upon reboot, sometimes the USB devices will not be recognised. This issue is to be monitored and some more work perhaps required figuring out what is happening.

We then looked at CW keying over the USB cable, instead of running a separate cable and related serial interface. The IC-7851 presents two com ports as mentioned above, COM7 seemingly the CAT control, COM8 the keying port perhaps. Another friend did mention that COM8 might be second RX, but not entirely sure on that. Anyway, COM8 was used in the keying config of Logger32, and the 7851 was configured to use USB2 DTR as its CW keying source. All worked great, with CW and break-in selected on the radio.

We then looked into getting the STEPir auto tracking the vfo frequency. The STEPir control box is quite an old version, pre-dating the current SDA100’s. After much head scratching, we decided to use the remote (ci-v) port on the radio. The TIP of the 3.5mm jack, going to PIN9 (ttl rx) of the 9way d-type female that plugs into the STEPir box, and the RING to pin5 (gnd). A quick solder job and it was all working. Note: the pin out of the STEPir 9 way is not standard serial, certain pins are there to be connected to different makes of radios.

It has been noted that the STEPir will only track when the vfo on the radio is adjusted, and not when Logger32 tells the radio to move frequency. The IC-7851 needs to have CI-V transceive turned on.

Some configuration settings recorded here as a record.