Recently I have been thinking about trying to activate a local SOTA (Summits On The Air) point and decided to take a trip out yesterday afternoon (Saturday) to Wentwood, a local SOTA point, reference GW/SW-033. I figured I would keep it simple to start with, and a local easy to reach summit was in order.

I made my way there, taking a short cut along a forest track, no problem for my landrover. 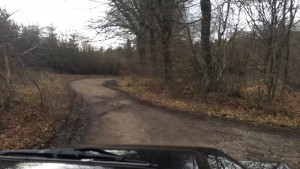 The SOTA point is some 100 meters from a commercial mast, which proved to be a bit of a problem as I will mention in a while. I parked up and walked the 10 mins or so to the OS trig point. Just follow the track that runs along side the mast, and then about 100m beyond that, on the left. 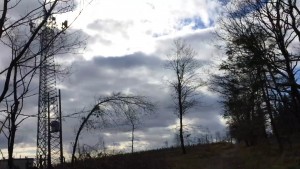 I found the trig point, partially covered in felled wood from previous forestry commission work. I managed to uncover the information plaque and get a picture. 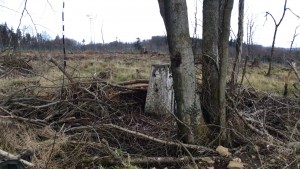 You can see the mast in the distance, approximately 100m or so. It proved to be a complete nightmare, totally swamping the front end of the Yaesu FT1XD 5w handy that I had taken with me. I set up the antenna, a home brew slim jim from 450 ladder line, slung from the branch of a tree. 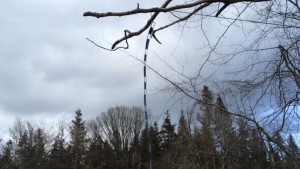 A very simple setup, a soft pad to sit on, supplies in the rucksack, the handy at 5 watts, the slim jim and a log book. I sat down and turned the radio on, and listened to a number of qso’s around the 2m band. Annoyingly signals would be 5/9 and then totally get destroyed by the mast. Initially I thought it was a connection problem, as things were so severe, but quickly came to realise it was the mast causing the havoc. Un-deterred, I decided to put a call out on 145.500 @5w FM, CQ SOTA, cq sota…….  To my amazement, people came back to me instantly and we headed to 145.475. 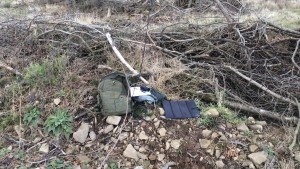 Working conditions were very bad, it was taking a good while to get all the information required from each station. Their signals would be 5/9 one second and gone the next, QRM from the mast was so bad that it was obvious that as soon as I had enough contacts in the log I would be heading down. You need four report exchanges with different stations to receive the points for the summit, but just one contact to activate it.  I am starting to find that locally all the high points have these QRM generators, such a shame.

MW0ECX/p was especially gratifying as Neil was on another summit, so it was a summit to summit contact. He was working from GW/SW-012, the Coity Mountain, north of ‘The British’.

In the end, I spent about 35 minutes on air, and decided to head down. The QRM made it a very difficult activation on 2M FM, but I thoroughly enjoyed it. The next mountain will be Machen Mountain (GW/SW-030), which is another simple summit to reach again, however it does suffer from local QRM as well from the masts there. I will probably take a HF rig next time as well.