So in readiness of the upcoming fox hunt (an exercise in direction finding), I disassembled my existing 2m ‘tape measure’ yagi and rebuilt it with some re-worked numbers. I will do a full article on the construction at some point.

I wanted to do some testing with Dale, 2W0ODS, his QTH is the other side of Newport. Anyway, 2m FM handy and the new ‘tape measure’ yagi in hand, Dale started giving a prolonged over via his omnidirectional collinear. I quickly ‘zeroed’ him in and obtained a heading for max signal strength. Just to note, my qth is low down, 6m or so ASL, and behind the rise that the motorway/roundabout/brewery sits on.

See the following for the results, quite amazing :

The red line is line of sight. As you can see it passes through Magor brewery, a large lump of metal with 100’s of smaller metal barrels.

The green line is plotted from Dale’s QTH and is hitting one of the Tesco distribution buildings and is no doubt reflecting off the side of this building. 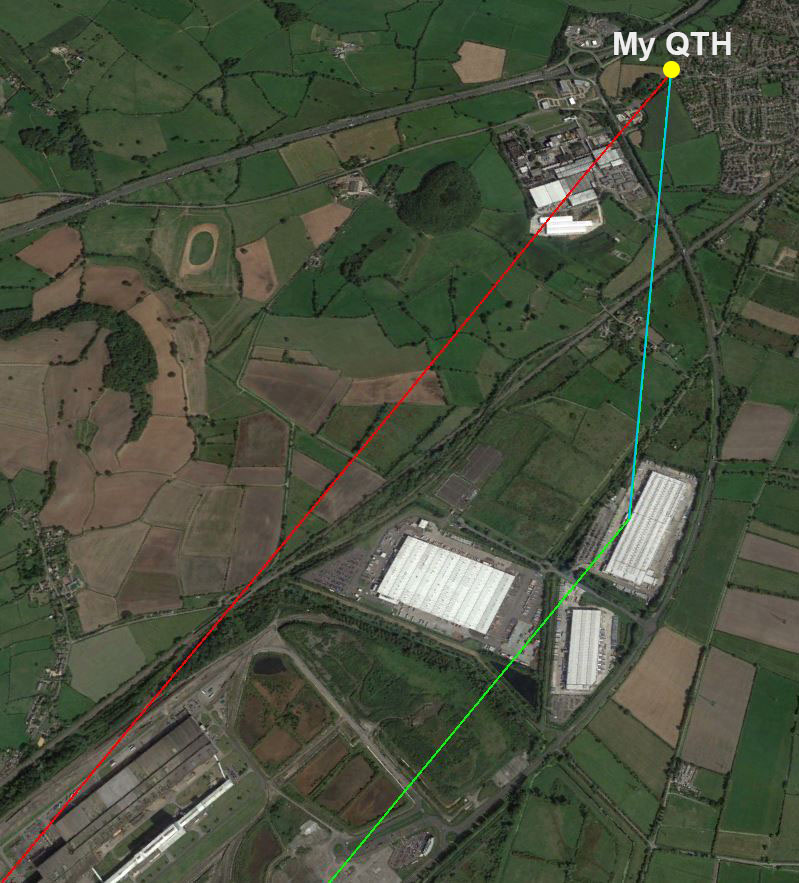 The size of the building compared to the 2m wavelength is of many orders of magnitude greater. To get an idea of how big something needs to be to ‘reflect’ a 2m signal then you only need to look at the size of the reflector on the yagi itself, something like 1005mm.

This was great to be able to visualise the signal path, and perhaps that Tesco building is making it possible to talk to Dale on 5w the other side of Newport.

Remember, fox hunt and direction finding can at times lead you ‘up the garden path’.